“Our Climate is our Future. Our Future is in our Hands”. IPCC Report on Mitigation of Climate Change 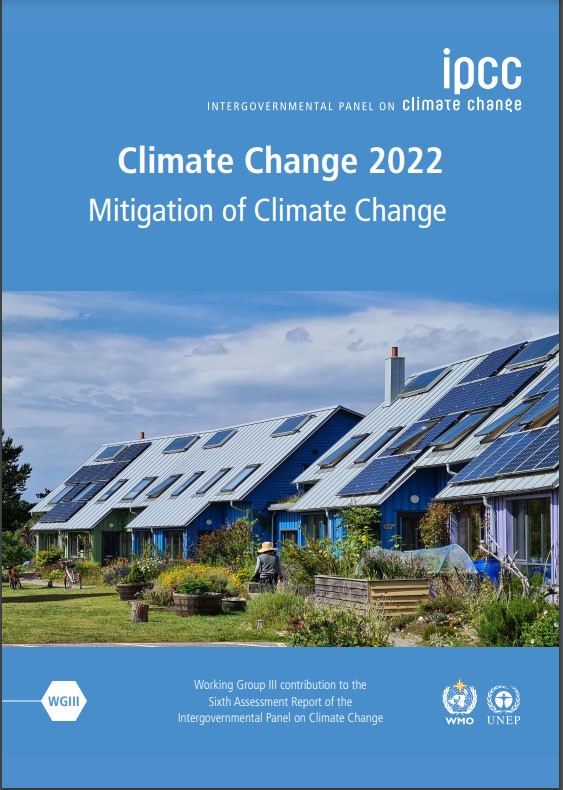 The IPCC Working Group III issued its long-awaited report with a media event which had the poignant title above. Of the IPCC's trilogy of reports, this is the one that focusses on how to reduce greenhouse gas (GHG) emissions. The bad news is that in 2018 GHG emissions were higher than any time in human history. The slightly better news is that the growth rate in emissions appears to be slowing, at least in the energy and industry sectors. But not anyway by enough.

The event emphasised that to achieve the Paris Agreement objectives, it was clear that we need "immediate and deep reductions across all sectors otherwise 1.5C is out of reach". Options described to reduce emissions focussed on the high-emitting energy and industry sectors. Some mitigation options can reduce environmental impacts, enhance health and increase employment and business opportunities. As climate change is the result of more than a century of unsustainable energy and land use, lifestyles and patterns of consumption and production, the report shows how taking action now can move us towards a fairer, more sustainable world.

In the energy sector, "major transitions are required" and reducing fossil fuel use and using CCS was the first option listed, followed by the other low-carbon options that you would expect. Decarbonising the transport sector relies substantially on decarbonising the power sector. Achieving net zero in industry sectors is challenging, but CCS is there as a solution.

Carbon Direct Removal (CDR) was also covered, as it will be necessary to achieve net-zero. They noted that engineered CDR such as Direct Air Capture (DAC) needs to be proven at scale, and to have agreed measurement, reporting and verification of its GHG achievements.

Professor Jim Skea concluded the presentation with a line, "we need more action now, for a fairer world, we know what to do". He also answered a very relevant question on when will it be too late to achieve 1.5C, "if we do not have advances in pledges before COP27, then maybe then it will be too late". He also noted that even if we rely on more CDR later instead, the climate impacts from peak temperatures beforehand will be catastrophic.

As well as working on CCS for thirty years, IEAGHG is increasingly working on engineered CDR, including DAC, and addressing the issues emphasised by this new IPCC report. IEAGHG were expert reviewers to IPCC and provided nearly 100 substantive comments to the Working Group III draft reports, which appear to have been acted upon, and we are pleased to see IEAGHG reports and papers being cited. We will produce a summary of the full report of 2913 pages with an Information Paper in due course.