Jan 10 Posted by Tim Dixon in Meetings and conferences

COP25 was held in Madrid, with impressive reorganisation by the UNFCCC secretariat and Spanish hosts to relocate it from Chile at just a few weeks notice. A main ambition of this COP was agreement on international cooperative mitigation actions, including emissions trading, known as Article 6 of the Paris Agreement. This was the one area of the Paris Agreement rulebook left unfinished at COP24. Much attention was also to be given to the two new IPCC reports on Oceans and Cryosphere and on Land, and the ongoing IPCC AR6 process, noting the opportunities for input of IEAGHG key reports such as on Higher Capture rates (IEAGHG 2019-02).

Article 6 is very important as it would create the means, rules, transparency and legitimacy for international actions to mitigate emissions across countries and industry sectors, including international emissions trading, and some hard-to-mitigate sectors need such opportunities. As the COP25 progressed, much was talked about the Article 6 negotiations and outstanding issues - what would be agreed to be included or not included, relationships with NDCs and NDC listed activities, carry-over of credits from the Kyoto Protocol, etc. As I started writing this note on the last evening of COP25 these were still unresolved and negotiations were still underway. The draft text I saw allowed for transition of CDM project activities to being recognised in Article 6, with the CDM rules and methodologies still applying for these, which would by implication include the Modalities and Procedures for CCS in CDM, and therefore CCS projects would be eligible for the new mechanisms created under Article 6. This is very important for CCS and reiterates the importance and value of the hard-fought-for Modalities and Procedures which were agreed at COP-17 (and in which IEAGHG were very involved (see Dixon et al Energy Procedia 01/2013; 37:7590-7595).

However, in the time available, all these details for Article 6 proved not possible to agree at this COP, and when COP25 closed on Sunday afternoon (the longest over-run of a COP) they were passed to COP26 (Glasgow 2020). Some stakeholders expressed views that it was better to wait to get them right than to get flawed agreements. Also not achieved were agreements on enhanced mitigation ambitions ahead of COP26, where the NDCs are due to be revisited. The final agreed COP25 decision text, the "Chile Madrid Time for Action", had lots of positive intentions stated but nothing detailed or agreed as above.

CCS at COP25
In the margins, several interesting developments were being shared and worth noting. Oxy Low Carbon Ventures' ambitions to scale-up and build a large-scale DAC project is very impressive. This is using Carbon Engineering's potassium hydroxide-based technology, to be operational in Texas by 2023 at the scale of 1Mtpa, followed by ten more under construction by 2024.

The latest ICEF Roadmap is on Industrial Heat Decarbonization and was launched by David Sandalow and Julio Friedman at a COP side-event. This Roadmap discusses four technological approaches for providing low-carbon industrial heat: hydrogen; biomass; electrification; and CCUS, and applications in the cement, iron and steel, and chemical industries.

CO2 removal techniques and governance were much talked about, with proponents of nature-based solutions seemingly particularly active. One piece of CCS misinformation at a CO2 removal side-event in the EU Pavilion caught some attention with the audience when the storage security of CO2 geological storage in BECCS and DAC was described as "uncertain" in comparison to soils, biochar, trees and mineralisation. I corrected this immediately at the side-event, citing the extensive evidence base, and the author subsequently corrected his slides appropriately.

Much continued to be made of the most recent IPCC Oceans and Cryosphere report around the COP and countries were urged to include ocean aspects in future NDCs.

The GCCSI launched their 2019 Global Status report at COP (which IEAGHG retweeted). As well as the updated project numbers and more detail than previous editions, it was very pleasing to see this has included our message on the ability of achieving higher capture rates at low cost increase (which we continued to highlight at COP25) (IEAGHG Report 2019-02).

Greta Thunberg gave a powerful speech in plenary (available on YouTube) which included her emphasis on using science and data from IPCC to drive decisions and further action.

Also at this COP there was a "CCS informal dialogue" between CCS stakeholders, organised by the International CCS Knowledge Centre and IETA, which IEAGHG attended and was a useful pooling of CCS interests and news.

The last CCS event of the COP was a Japanese pavilion event showcasing Tomakomai reaching 300kt and its response to natural earthquakes, and Japan CCUS policy. This had a good attendance for the last official day of COP.

IEAGHG at COP25
For IEAGHG, our primary focus was organising the UNFCCC Side-event with our collaborators the University of Texas, the International CCS Knowledge Centre, CCSA and Bellona. This was the only UNFCCC Side-event focussed on CCS. Titled "Carbon Removal and Return – Can CCS Decarbonise Industry in South America and Help the Oceans?" it was designed with CCS relevance in the original COP location in mind and a good gender balance. I provided the context of CCS in the UNFCCC environment, to remind attendees that the knowledge, rules and encouragement exist from UNFCCC for large-scale CO2 reductions from safe and secure CCS. The main scene setter was provided by Dr Carol Turley OBE on the new IPCC report on Oceans and Cryosphere, to re-emphasise that the oceans especially need CO2 reductions from the atmosphere. This was followed by a talk on CO2 'removal', ie Direct Air Capture, by Jen Wilcox, and then moving on 'return', ie capture and storage, with Katherine Romanak on proving storage security, Keith Whiriskey on CCS infrastructure for transport, and Beth Hardy on their new collaboration on capture from cement plant in Alberta. A new aspect was covered by Piera Patrizio of IISAS on the socio-economic value (including jobs) from CCS around regions of the world, especially BECCS in South America. An intended audience of this Side-event was UNFCCC country delegates who are getting interested in whether they can use CCS in their own countries, and Andrew Jupiter showed how this is happening in Trinidad and Tobago, including their recent workshop which IEAGHG assisted with. As the only UNFCCC Side-event on CCS, the room was full, and the speakers stayed around afterwards continuing to answer questions with interested audience members. The event was covered by IISD and can be seen at https://enb.iisd.org/climate/cop25/side-events/4dec.html . There was also live streaming which will be available for some time afterwards at https://bit.ly/2DLVgsa (noting that the camera set-up did not reach all of the panel).

IEAGHG also spoke at the CCP event on CCS Regulations, organised by Arthur Lee of Chevron. This event provided a good review of mature CCS regulations by Lee Solsbery of ERM, and taken right up to date with the requirements for 45Q, the Californian Low Carbon Fuel Standard, and CO2 export.

IEAGHG contributed to a booth for two days, providing information on CCS to a wide range of interested delegates. There is always interested in education on CCS, with much interest in IEAGHG's International CCS Summer School, and in the University of Edinburgh's free online course on CCS.

IEAGHG spoke at two more side-events in the second week. "Transforming industry: Developing carbon capture, utilisation and storage clusters" was co-organised by IEA and United Kingdom in the United Kingdom Pavilion, with myself as a panellist on legal and regulatory aspects of clusters. This side-event included highlighting the Drax announcement on being net-zero with biomass and capture. The Japanese event,"Saving Our Beautiful Planet with CCS (Part2)", was organised by Japan CCS Co, METI and NEDO in the Japan Pavilion, with myself presenting on Sharing Learnings from Global CCS Developments and Projects.

IEAGHG will hold a webinar on the 14 January with more detail and reflections by Arthur Lee of Chevron on the results from COP25. 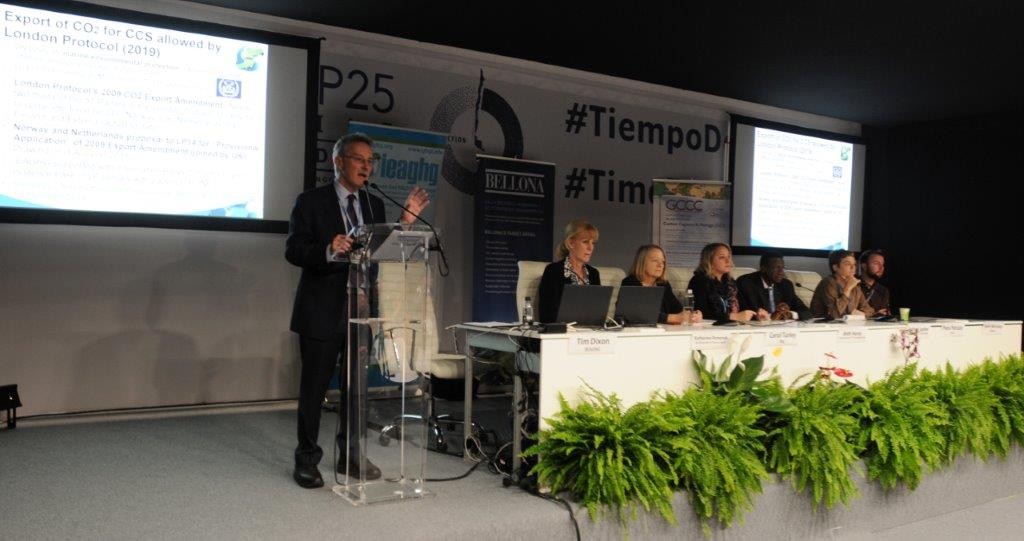