COP26 and the Glasgow Climate Pact

In the late hours of Saturday the 13th November the 197 countries at COP26 agreed on a new agreement to build upon the Paris Agreement, called the Glasgow Climate Pact. In this package of decisions there will be much detailed analysis by many to come, I provide a brief summary from my perspective here.

From our mitigation perspective, the most significant aspects of this Glasgow Climate Pact include that the Nationally Determined Contributions (NDCs), which were required to be updated every five years (ie 2020, 2025, 2030) will now have to updated again by the end of 2022 (still with the target year of 2030).

Also significant is that fossil fuels are explicitly mentioned for the first time in such an agreement. As the draft text developed over the days, I was pleased to see the clarification of "unabated" being added to the phasing out of coal, meaning that coal use with CCS can continue. Also to be phased out are inefficient fossil fuel subsidies, although what is meant by inefficient subsidies is not clear.

Other major aspects of the Glasgow Climate Pact include more finance to developing countries, which is asked to be doubled by 2025, and a new process to discuss funding of activities relating to "loss and damage" done to countries by historic emissions. Although this area is not as strong as developing countries wanted, and areas of potential future tension.

In general though, countries appreciated the hard work of the UK Presidency, especially of Alok Sharma. So it was troubling to watch live the drama in the final stages in plenary as India and China pushed back on the Pact because of the wording around coal, changing "accelerating efforts towardsthe phase-out of unabated coal power" to "phasedown of unabated coal power". Alok Sharma was visibly upset at this negotiating behaviour, but acted to save the Pact and asked counties to accept this, which they did. Both India and China have been researching CCS since the mid-2000s when I started on CCS in the G8 with them, so their reasons should not be technological.

I provide the final draft paragraph here (with the India changes) because it shows clear recognition of the importance of scaling up deployment of clean energy technologies, including CCS, which is the focus of IEAGHG and the IEA in Paris, and of many other organisations.

"36. Calls upon Parties to accelerate the development, deployment and dissemination of technologies, and the adoption of policies, to transition towards low-emission energy systems, including by rapidly scaling up the deployment of clean power generation and energy efficiency measures, including accelerating efforts towards the phasedown of unabated coal power and phase-out of inefficient fossil fuel subsidies, while providing targeted support to the poorest and most vulnerable in line with national circumstances and recognizing the need for support towards a just transition;"

Another major area for this COP was to finalise and agree the unfinished aspects of the 'rulebook' for the Paris Agreement. These primarily relate to Article 6, on international collaboration including through carbon markets. Article 6.2 relates to emissions trading between countries, and Article 6.4 is a project-orientated crediting mechanism (like a new CDM). Both Decisions were finalised, with provisions to ensure their integrity such as 'corresponding adjustments' to ensure no double-counting should take place. These set up structures for carbon markets to work in support of the Paris Agreement, will assist both countries and companies to achieve higher ambitions, and could be beneficial for multinational CCS projects. The hard work of developing and agreeing the CCS CDM modalities and procedures should be beneficial for CCS projects under the new Article 6.4 mechanism.

To note one ambiguity for CCS, as 6.4 drafts developed through COP I saw the addition of text that said "taking a conservative approach that avoids locking in levels of emissions, technologies or carbon-intensive practices", as this could include many activities which are carbon intensive but actually have very low emissions, such as CCS on fossil fuel use. I flagged this with some negotiators but it remained in the final Decisions, so we trust the way this will be interpreted means there are no negative implications for CCS. In both in 6.2 and 6.4 Decisions, they ask SBSTA to produce further recommendations, for example around emissions avoidance, so work on Article 6 detail is not finished yet.

A major objective of the UK Presidency was to keep 1.5C within reach. Certainly, with the rush of NDC updates just before COP, based upon those NDCs, we saw the projection of temperature rise improve from 2.7C to 2.4C. On a different basis, the IEA's and others' analysis of the new 'net zero pledges' also (which cover some 90% of the world's emissions), there was improvement from 2.1C to 1.8C, with the important caveat if all pledges and actions are delivered. Many will say that 2.4C is still a long way short of 1.5C, and still depends on the actions in NDCs being delivered. But I have never experienced such progress in temperature projections during a COP, and which are planned to be strengthened further at COP27 with new NDCs.

Agreements outside the UNFCCC process

In addition to the UNFCCC COP26 agreements, some countries came together to produce more specific agreements, including on fossil fuels. For example, the Global Coal to Clean Power Transition Statement was agreed by 46 countries, to rapidly scale up technologies and policies to achieve a transition away from unabated coal power generation. This is similar to the existing G7 agreement and the Powering Past Coal Alliance (which specify moving away from unabated coal). Another new agreement at COP, the International Just Energy Transition Partnership, pledged $8.5 billion to end South Africa's reliance on coal, as a joint effort between France, Germany, UK, the US and EU, although without any mention of unabated coal at this stage. A new agreement called "Beyond Oil and Gas Alliance" (BOGA) and led by Costa Rica and Denmark, with France, Greenland, Ireland, Quebec, Sweden and Wales (UK), will commit to ending oil and gas exploration and production. This seems to be just focussed on supply-side measures, and does not consider abated end-use of gas and oil.

So overall, in terms of UNFCCC outcomes, many would see this as a successful COP. It certainly achieved the UK Presidency's main aims, most importantly keeping 1.5C within reach (for the moment). We will see whether countries actually will improve their NDCs again within the next year to do so.

In the Blue Zone of COP26, Carbon Dioxide Removal (CDR) seemed to be discussed more than CCS was, and this will be an important area for IEAGHG to increasingly follow and to input to. We will also follow the further work by SBSTA for Article 6, inputting as necessary.

IEAGHG's role in COP is to be impartial information provider on CCS and CDR, and I was proud to do this in five side-events (two of which we organised and one being an UNFCCC Side-event) and an exhibit, working with our collaborators the University of Texas, CCSA, Bellona, the International CCS Knowledge Centre, and also with the Global CCS Institute and IPIECA.

For more detailed information, I recommend IISD's detailed summary which will be out in a few days, as well as the UNFCCC COP26 decision documents themselves. 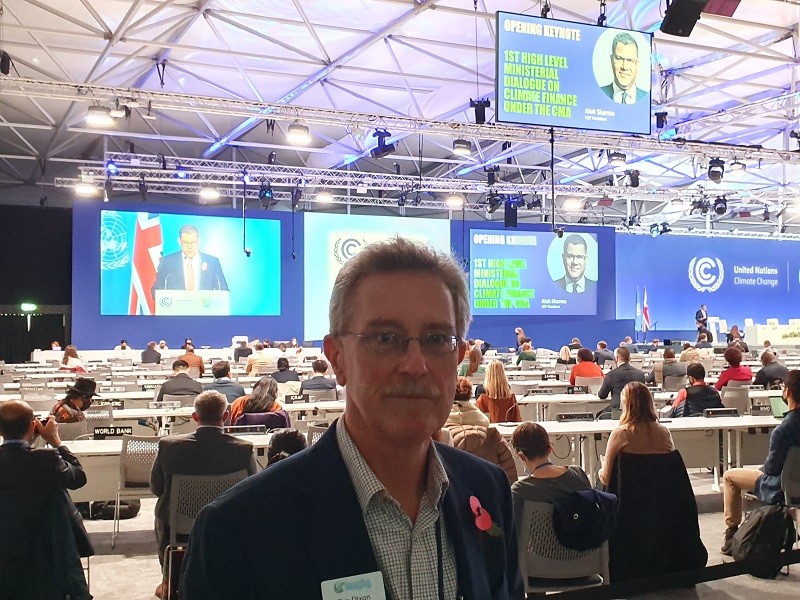