May 01 Posted by Tim Dixon in General

The CSLF Technical Group meeting was held in conjunction with the Midwest Geological Sequestration Consortium (MGSC) Science Conference at Champaign, Illinois, in the last week of April. Good updates on CCS projects were provided in both, with a focus on activities in the USA not surprisingly. Of particular interest (to me at least) were some updates and news which I will mention briefly here.

Significant interest is being generated by the enhanced 45Q tax incentive for CCS and CCUS and the MGSP meeting held a panel discussion on this topic. 45Q has a requirement to demonstrate secure storage. How best to do this? There are various options including using the EPA's Class VI rule, or some have been suggesting using EPA's Greenhouse Gas Reporting Program's Subpart RR, and several MRV plans under Subpart RR have been approved by EPA for Occidental, Exxon and Core Energy sites. A new idea presented in the panel at this meeting was the proposal to use the new ISO standard for Storage through CO2-EOR in order to demonstrate secure storage. This has recently been finalised and published as ISO 27916 (2019). The proposal is to use ISO 27916 in conjunction with SubPart UU (greenhouse gas reporting rule for oil and gas production) instead of using Subpart RR alone. The reasons and relative merits are to be investigated and discussed, but the suggestion from the panel was that would be more clarity for the operators, including for project termination. An interesting potential use of this new international standard.

The CSLF meeting had updates from some CSLF recognised projects. Adam Goff of 8Rivers presented a summary of the test results from the NetPower project, an interesting power project concept based on oxy-firing a gas turbine and using supercritical CO2 as the working fluid. The results look promising from last year's test firing programme. With 170 hours of operation on fuel/oxygen in the cycle, the process reached "highly controlled steady states at elevated temperatures and pressures", and the "cycle performance matched modelled performance". Another interesting option mentioned was the use of the process for energy storage. This would use grid electricity to run the air separation unit instead of using energy from the gas turbine, storing the oxygen for use later use in firing the turbine and thus reducing parasitic loss to run the air separation unit. 8Rivers estimate 150 MWh could be available in this way.

The SECARB Early Test at Cranfield Project was given a "CSLF Global Achievement Award" for advancing CCS technology. This project was run by the Bureau of Economic Geology at the University of Texas at Austin, and Susan Hovorka presented a summary of the project and received the award from the CSLF Technical Group Chair Åse Slagtern. This project was the first of the US DOE's RCSP phase III projects to inject CO2 at scale, monitoring over 5 Mt of CO2 injected over 5 years. It resulted in the testing and development of monitoring approaches which are now being used in commercial-scale projects including Petra Nova and Port Arthur. Developments included pressure monitoring of the above zone monitoring interval, process-based soil gas monitoring, deep application of electrical resistance tomography, demonstration of the stacked-storage concept, and also determining some limitations of 4-D seismic and groundwater surveillance. All of these monitoring developments have been presented and discussed in the IEAGHG Monitoring Network meetings and GHGTs over the years, thus sharing the learnings globally.

A visit to the Illinois Basin Decatur Project and the Illinois Industrial CCS projects at ADM's Decatur site was included in this week of meetings. Many aspects of interest from these bio-CCS projects, much reported at GHGTs and IEAGHG Network meetings, including the monitoring 'down-selection' and refinements for the second and larger project. This Illinois Industrial CCS project has now reached 1.5Mt CO2 injected, and the monitoring well from the Illinois Basin Decatur Project (which ceased injection in 2014) is being used to monitor the pressure influence of the nearby Industrial project.The trip concluded with a visit to the nearby National Sequestration Education Center on the Richland Community College Campus, an excellent facility for education on CCS and other clean energy technologies, much used by schools and local groups.

Many thanks to Illinois State Geological Survey and ADM for hosting this interesting week.

More information on the CSLF meeting will be found at https://www.cslforum.org/cslf/ . 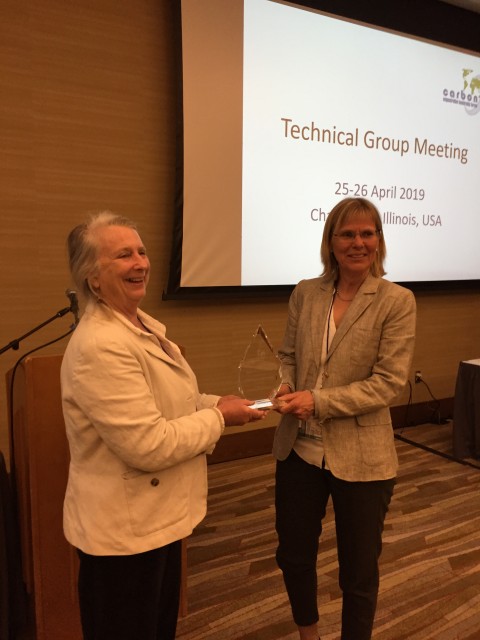