Oct 22 Posted by Tim Dixon in Meetings and conferences

I am very pleased to inform you that on Friday 11 October the London Protocol Parties at their annual meeting (LC41/LP14) approved a Resolution for Provisional Application of the 2009 CCS Export Amendment. This Provisional Application allows countries to agree to export and receive CO2 for offshore geological storage. This now removes the last significant international legal barrier to CCS, and means that CO2 can be transported across international borders to offshore storage. Congratulations to Norway and the Netherlands for taking the initiative with their proposal, joined by the UK, and their hard work in its preparation and working with other countries.

IEAGHG were the only CCS-specific organisation present in the London Convention meetings this week (and in general), thank you to the IEA(OECD) for again including us into their delegation. We actively supported the Norwegian and Netherlands proposal with evidence-base relating to offshore CCS developments and the new IPCC Ocean and Cryosphere report, and got a presentation given to delegates by the STEMM-CCS project on marine monitoring advancements. We were active in both the Plenary and in the Drafting Group that worked on the details of the Resolution. It took some four hours of Drafting Group meetings to finalise the details, which took into account a range of views by Parties and by Observers such as Greenpeace and ourselves.

A press release from Norway is available at https://www.regjeringen.no/no/aktuelt/eksport-av-co2-for-offshore-lagringsformal-tillates/id2673809/ (in Norwegian). A press briefing from the IMO is available at http://www.imo.org/en/MediaCentre/PressBriefings/Pages/22-CCS-LP-resolution-.aspx . In due course a copy of the Resolution will be available as an annex in the report of the meeting LC41 on the IMO website http://www.imo.org/en/OurWork/Environment/LCLP/Pages/default.aspx under "IMODOCs" and "Public Account" and the LC41 meeting. When these documents are finalised and public we will produce an IEAGHG Information Paper with more details of the Resolution.

For background and a description of Norway's proposal see IEAGHG Information Paper 2019-IP11 http://documents.ieaghg.org/index.php/s/5PFjfx8GPRZ9I1P (note the Resolution wording changed from the proposal). As a reminder, the London Convention and Protocol are the global treaties that protect the marine environment. A CCS amendment proposed by UK and others was approved in 2006 to allow CO2 storage in sub-seabed formations, it came with guidance on permitting in the 'CO2 Specific Guidelines' (2007). As the London Protocol also prohibits exports of wastes for dumping elsewhere, an amendment was proposed by Norway and approved in 2009 to allow export of CO2 for geological storage. The detailed work on the guidance on transboundary CCS and export of CO2 was completed in 2012 and 2013 (see IEAGHG 2013-IP26 and 2014-IP19). However for this CCS export amendment to come into force, two thirds of the now 51 Parties to the London Protocol need to ratify the amendment (ie 34). In terms of ratification progress, this has been extremely slow, with just Norway, UK, Netherlands, Iran, Finland and Estonia having ratified over the ten years since, whilst the number of Parties has grown by 14 over the same period. This means there remained this legal barrier to exporting CO2 from one country to another for offshore storage projects. In 2011 the IEA produced a Working Paper "CCS and the London Protocol: Options for Enabling Transboundary CO2 Transfer", with IEAGHG input. This described options to waiting for ratification, and these options were more recently been presented and discussed at the 3rd Offshore CCS workshop in June 2018 (IEAGHG Report 2018-TR02) and at GHGT-14 session 11C. One of these options was Provisional Application. 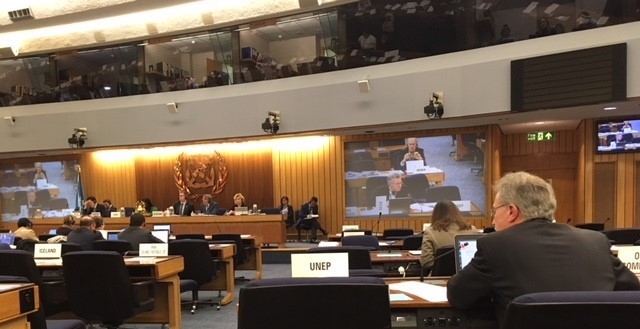