On the very day (1st November 2021) the British Prime Minster, The Rt Hon Boris Johnson welcomed 120 head of governments at the COP26 in Glasgow for the last chance to keep the 1.50C alive, I took part in the Shell Catalysts & Technologies webinar on accelerating a sustainable recovery with a focus on hydrogen technologies. While the likes of young environmentalists including Yrsa Daley-Ward, Txai Suruí and Elizabeth Wathuti gave glowing speeches to world leaders in the conference hall, Greta Thunberg and her legion of peaceful protesters made their voices heard outside the conference hall. Their message, irrespective of who says it or where it comes from, is unanimous. 'We must act NOW'.

Acting now is a race to net zero by 2050, which is inconceivable to achieve without low carbon hydrogen in the global energy portfolio. Shell has also set out a target to become a net zero emissions energy business by 2050 in their Powering Progress Strategy. Shell already has plans underway to expand the 10 MW Refhyne project, the largest Polymer Electrolyte Membrane (PEM) electrolyser project in Europe, to 100MW. However, in the short and medium-term CCS-abated fossil fuel hydrogen (described as blue hydrogen by Shell) is expected to play an important role towards the global decarbonisation campaigns.

The hydrogen themed webinar was relayed in 3 segments and moderated by Nick Flinn, GM Decarbonisation Shell Catalysts & Technologies, where he gave an overview of the expectation of the meeting. He also introduced the panelists: President of Shell Catalysts & Technologies, Andy Gosse; the VP Hydrogen Shell, Paul Bogers; and finally, Yunji Xu who is the GM of Hydrogen Shell.

Andy started up by acknowledging how Covid has impacted not only people across the world but businesses. The development of the hydrogen economy was no exception. The immediate reaction to Covid was cash preservation that was prompted by the decline in the major demand of energy. Understandably, Andy noted, there was a reduction in available cash flow which led to disruptions in operations and R&D during the lockdown period. The second panelist, Paul, talked about the rapidly growing support from governments for hydrogen especially countries like Germany, Japan, Australia, Chile and Canada (as presented in Figure 1), that have reinvigorated the growth of hydrogen development in 2021. He further noted the UK's hydrogen strategy, which sets out to produce 5 GW of low carbon hydrogen production capacity by 2030 via the 'twin track' approach, and the hydrogen commitment of the current US administration. This support creates momentum, and contributes to a foundation of how hydrogen might create viable business models and attract investment. Yunji then proceeded with presenting the different hydrogen production methods by using the colour taxonomy. The main ones being grey (hydrogen production from unabated fossil fuel), blue (hydrogen production from CCS-abated fossil fuel) and green (hydrogen from electrolysis powered by renewables). 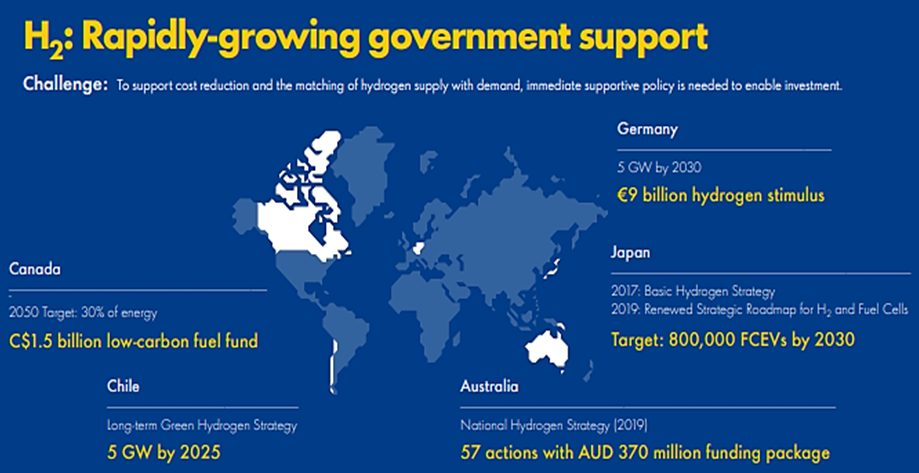 It is important to note that the International Energy Agency (IEA) and US Department of Energy (DOE) do not use the colour taxonomy for hydrogen production pathways. The International Centre for Sustainable Carbon (ICSC) has underscored the justification of the colour codeless approach by stating that:

''In general, there is no established colour classification for hydrogen from biomass, nuclear or different sources of grid electricity... as the environmental impacts of each of these production routes can vary considerably by energy source, region and type of CCUS applied, colour-based classification for hydrogen production is not used... Instead, the approach is based on a technology agnostic approach where the production method is described as either:

by The International Centre for Sustainable Carbon (ICSC)

A live question and answer session was the last segment of the webinar where the panelists answered questions raised by the participants. One of questions asked was based on the recent study from Cornell University and Stanford University which claimed that blue hydrogen could have a carbon footprint 20% higher than burning natural gas, mainly due to uncaptured CO2 and fugitive methane emissions. Andy responded to the question (mirrored in the information paper by IEAGHG titled Blue hydrogen: fact vs fiction (2021-IP13) by addressing the assumptions made by the scientists from these US universities. These assumptions include high values of upstream methane intensity and low values of CO2 capture efficiency reported in their study, Further, the employed a Global Warming Potential (GWP) window of 20 years rather than the customary 100-year window employed by among others, the US EPA and IPCC. Another response to the question raised in relation to how low carbon is blue hydrogen can also be found on the Sustainable Gas Institute page of the Imperial College London.

The panelists further addressed the question raised with regards to 'what is Shell doing to advance blue hydrogen technology'. Their response was founded on the experience of operations from previous hydrogen projects. This has provided essential knowledge and learning how to reduce the overnight expenditure, running costs and the carbon footprint of production processes. The perspective on how fossil fuel originated hydrogen production integrates with the carbon capture, and sharing infrastructure and utilities to improve improvements, as well as exploring at how it integrates with blue ammonia production, is also studied. This approach creates suites of integrational opportunities and potentially process efficiency improvements. Shell has acknowledged that new technologies are coming through for the next generation of carbon capture technologies.The company is currently running demonstration studies on both solid sorbents and amine solvents systems. Another key area that Shell is working on is the safe and cost-effective delivery of hydrogen beyond the plant gates.

Nick closed the meeting after the question and answer session while thanking over 2,000 participants who attended the hydrogen themed webinar.