The Keeling Curve Frightens Me

The Keeling Curve, named after its inventor Charles David Keeling, is a wonderfully simple communication tool. It shows in a very descriptive way the increase in atmospheric concentrations of CO2 since the 1950s.

What frightens me is the trend it is showing. Between 1960 and 2015, we see a steady increase in atmospheric CO2 concentrations from below 320ppm to 400ppm. I remember reporting in one of Information papers only (see http://www.ieaghg.org/docs/General_Docs/Publications/Information_Papers/2016-IP7.pdf) that, in May 2015, the CO2 concentration in the atmosphere had reached the staggering level of 400ppm. This made international headlines in the media at the times, with articles suggesting such levels had not occurred since prehistoric times.

Now, only 3 years later, the concentration in the atmosphere has increased to 410ppm, yet the media in my mind seem to have passed this by. I guess it is not headline news any more, but it should be. The fact that the atmospheric concentration has grown by 10ppm in 3 years is frightening. Such a headline should have raised an international call for urgent action. The fact that it did not frightens me more than the concentration. It really concerns me that the media is becoming complacent to climate change. 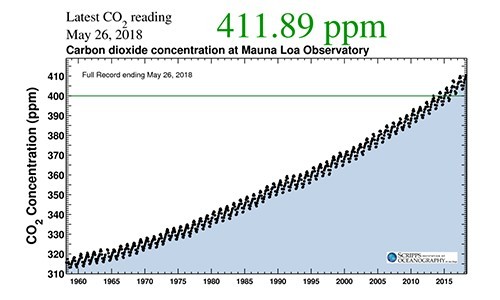